How do you create a beautiful garden in a dry, low water region without needing to constantly irrigate or risk having it look like a desert?

The main takeaway I got from a recent trip to California was how skillfully they combined native & non-native plants to create lush gardens.

California, as you may already know, has just come out of a severe seven-year drought. Whilst I’m sure some of the gardens I saw did have irrigation systems, they still had to choose plants that could withstand the dry conditions and get by with minimal watering.

Minimal watering is what xeriscaping is all about. And it’s visually much more pleasing than Zeroscaping which is as it sounds – not a lot other than rocks and gravel!

Creating a look of lushness

In California, they used a mix of Agaves, Mesembryanthemums, and various South African plants from the Proteaceae family mixed in with natives and the combination created a lushness that didn’t feel restricted and most importantly looked good.

*Of course, not everyone has a climate that can grow succulents so replaces those with plants that do a similar job like Bergenias. Having large leaf plants creates a lush look.

Another way to avoid the ‘desert-look’ is to use mass planting of 1-3 different varieties in big swathes. Research which plants will grow well in your soil conditions and plant in large groups to cover the soil.

Structural planting is important in any planting scheme but in dry gardens planting areas tend to be larger as there isn’t usually a lawn, so clarity is even more important.

Plants that have a very clear form, like a spikey or round shape help create clarity in the planting borders. If you’re in colder climates, hardy grasses can create a similar effect. But really, as long as you can clearly see different shapes and form, then it’s going to look good, so don’t get hung up on specific plants.

Mulch areas of empty soil between plants with large cobbles to create interest and boldness to the planting scheme. Mulches will also help keep moisture in the soil (as long as the soil was watered beforehand). 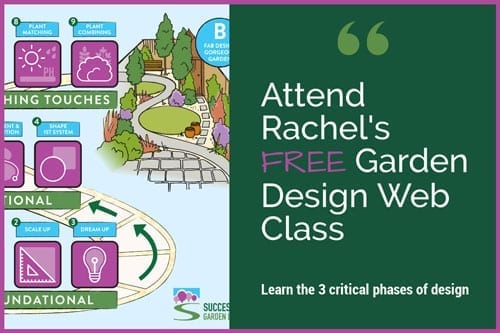