For me, it’s the silly season. We are working flat out, trying to get gardens done in time for summer. One recently, more or less finished garden, is the now infamous Spanish Courtyard… 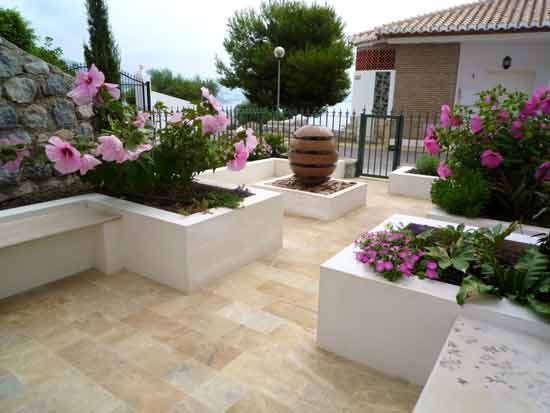 This is an updated photo of the garden which was featured in the garden design video tutorials. There are still a few plants left to put in but it’s coming together nicely. The water feature is somewhat bigger than I was told it would be, but apparently it looks in proportion when you are in the garden!

Despite being rushed off my feet, I have still found time to watch Channel 4’s Landscape Man. Tonight’s episode was another interesting one. The client’s budget was £250,000.

I’ve been writing about the importance of design when planning a garden and this week I had high hopes because they had a real live designer involved! Yay, at last. Trouble is he didn’t come across as overly effective. He was so busy with his Chelsea Flower Show preparations, that he had to let the client’s get on with it half way through.

They didn’t seem to mind that much but even so, I didn’t feel it was the best advert for designers. I was also left feeling that they’d spent an awful lot of money with not a great deal to show for it. Yes the terrace was nice and the large specimen trees were beautiful but I found myself asking ‘Why?’ a lot throughout the programme.

Putting a modern, ex-Chelsea, show garden in part of the garden, close to that style of house didn’t ever seem like it was going to turn out well…

To me, it just didn’t feel like the design flowed coherently. The pleached hornbeams didn’t seem to do a lot, other than be really out of proportion with the width to height ratio of the path they surrounded. It looked uncomfortable. I did like their metal pergola though, that was very nice.

I’m a great believer in putting things in the garden for good reasons. They created a ‘stumpery’ (if that’s how you spell it) which is basically dead tree roots with ferns planted in. Ok, interesting idea but why? It didn’t really do anything for the look and feel of the garden.

I am looking forward to next week’s show though. If you read the comments on the review I did on the first Landscape Man programme, you’ll have read Ed’s comments. His garden is next in line to be shown in the series and they had to cope with a very overgrown 4 1/2 acre site on the south coast of Guernsey. The garden is lashed by strong coastal winds, so they have had to create a garden that works with harsh conditions.

Everything Should Earn Its Place In Your Garden

If you are in the midst of planning your garden and have lots of creative ideas, sit with them for a little while to make sure they are really right for your garden. Random ideas never work well, it’s really important that features tie in well with everything else in the garden. And if you plan to design your garden on your own, check our online garden design courses.

« Previous Post Don’t be Fooled by The Landscape Man! Next Post » How To Plant A Small Courtyard Garden